Is your portfolio ready for higher taxes?

The Bush-era tax cuts might well be extended again this year, at least for most taxpayers. But the long-term picture is less rosy. 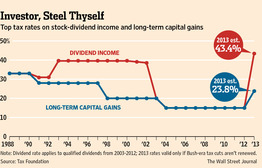 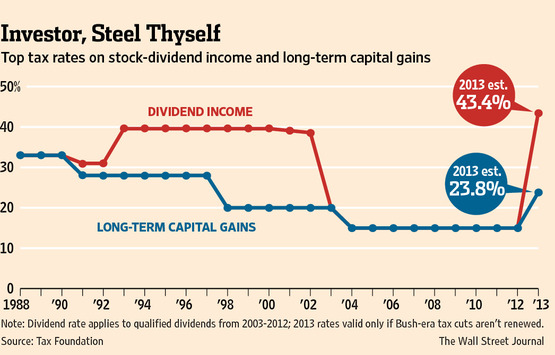 Today’s tax rates on investments are low by historical standards, with long-term capital gains and stock dividends taxed at a maximum rate of 15% each, versus 28% and 39.6%, respectively, at one point during the 1990s.

It is hard to see this lasting. Without sharp tax increases, says the Congressional Budget Office, the national debt will quickly skyrocket to unsustainable levels—even after accounting for budget cuts. Meanwhile, two new taxes related to the health-care overhaul will take effect next year on higher-income taxpayers: a 3.8% tax on net investment income and a 0.9% increase in the Medicare tax.

Here are some ways to shelter your assets before new rates kick in.

Sell your winners early. The usual advice on taxes is to defer them as long as possible, but if rates are going to rise, you might want to stand that advice on its head.

It might be better to sell your winners before rates rise. Better to pay 15% tax on your big Apple profits today than, say, 25% down the road. If you want to keep the stock, you can always buy it back later.

December usually sees a flood of “tax-loss selling,” as investors sell their losing stocks to lock in the losses. If tax rates jump after Dec. 31, we may see a lot of “tax-gain selling” just beforehand instead.

Buy municipal bonds. Muni-bond income is generally free from federal taxes and from taxes in the issuing municipality. That is a big advantage over corporate and Treasury bonds, whose coupons are heavily taxed as ordinary income.

Usually, munis offer lower gross yields than the equivalent taxable bonds, but not at the moment: Thirty-year triple-A-rated municipals yield about 3.5% today, according to muni specialist FMS Bonds. Thirty-year Treasurys yield just 2.6%—or 1.7% after deducting 35% tax.

Munis aren’t quite as “safe” as Treasurys, but top-rated munis are nearly so. You can buy individual bonds, or a fund: Options include the Vanguard Intermediate-Term and Vanguard Long-Term Tax-Exempt funds, which charge 0.2% in annual fees, or the iShares S&P National AMT-Free Municipal Bond MUB +0.08%exchange-traded fund, which charges 0.25%.

Buy a home. The best tax shelter available to Main Street investors right now might be your primary residence. When you sell, your first $250,000 in capital gains is tax-free. That rises to $500,000 for joint filers.

If you already own, you can up your investment by remodeling in a manner that adds value, or by trading up.

This wouldn’t make sense if real estate were expensive: Few who bought six years ago have any capital gains to protect. But house prices nationwide are at their cheapest levels, compared with rents or household incomes, since the 1990s. And homeowners can finance purchases at less than 4%.

If it is cheaper to own than to rent in your area and rents are rising, then real estate is probably a good deal.

Max out your Roth IRA. Investors have access to a range of tax-sheltered accounts. In an era of rising taxes, the best one looks like the Roth individual retirement account. You contribute with money after paying today’s tax rates. You then withdraw money tax-free down the road, when rates presumably will be higher.

There are two ways to max out your Roth this year. First, you can contribute $5,000 per person—$6,000 if you are 50 or older. Second, you can convert your regular IRAs to Roth accounts. You will have to pay income tax on the money converted.

Check the math on your 401(k). The standard financial advice has been to max out your 401(k) contributions. But if taxes rise sharply ahead, it may not be that simple.

Contributions to a 401(k) are tax-deductible today, but all the money you withdraw—not just the investment gains—will be subject to income tax. This makes sense only if you think your tax rate will be lower in retirement than it is today. Many investors could face big, unexpected tax hits on their 401(k) withdrawals when they retire.

A small number of employers offer a Roth 401(k). These function like a Roth IRA: You contribute with after-tax dollars today, but future withdrawals are tax-free. You also may have the chance to convert your current 401(k) account into a Roth.

Consider other tax shelters. If you have a lot of taxable investments you might want to consider some other sheltered accounts, such as a 529 college savings plan for your children’s tuition, and low-cost variable annuities, such as those offered by Charles Schwab SCHW +2.42%or Fidelity Investments, which are investment accounts inside an insurance wrapper.

In each case, you contribute after-tax dollars. In a 529 plan, withdrawals are tax-free if spent on qualified education expenses. In a variable annuity, gains will be taxed as ordinary income when you withdraw them. But both will shelter investments from annual tax liabilities along the way. That can be a powerful ally, especially for investments—such as bonds and high-yielding stocks—that generate a lot of income.

Finally, an obvious, but important, reminder: Tax laws are tricky, and everyone’s circumstances are different. Check with your tax professional before making a move.